Top > List of “” > Analysis on Compromised Websites in Japan

Analysis on Compromised Websites in Japan

Figure 1: Number of Compromised Websites Detected Each Month in Japan 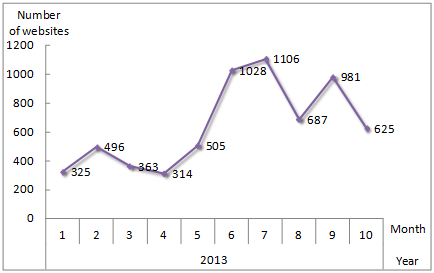 Today, I would like to share with you several attack methods with different characteristics which JPCERT/CC observed throughout the year. Since researchers around the globe have spotted and written up on various attacks, some of you may already be acquainted with these methods.

1. iframe “counter.php” injection attack
We have been seeing websites containing an appended iframe at the end of the original html code as follows:

Once inserted, this iframe will be used to download contents from remote malware distributors (the so-called drive-by downloads), and to perform other types of browser-based attacks.

2. Apache module injection attack (aka “Darkleech”)
Known as “Darkleech,” we have also seen a rogue Apache module being installed on compromised servers and turning legitimate websites into attack sites. When visiting such an attack site with Internet Explorer, the following cookie will be set to the visitor’s PC:

If the browser visits the attack site using the above cookie, a malicious iframe will be dynamically injected only at the point of the visit and redirects users to the infamous Blackhole Exploit Kit landing page. Because of the nature of this compromise – that iframe is not actually a part of their static page – it makes it particularly difficult for website owners/operators to detect or recover from the compromise.

Like the string in the red frame above, we have been observing codes with similar comment tag patterns inserted in front of or after the scripts:

It remains unclear what these comment tags mean. We suppose it may be the attacker’s signature or calling card to mark its identification. The code in the iframe redirects visitors to the attack sites, which will attempt to install some info-stealing malware such as Kelihos and Pony to visitors’ PCs.

This iframe has nothing to do with Twitter, but visitors’ PCs with this iframe will be redirected to a malicious webpage which resembles the Redkit Exploit Kit.

Summary of Our Findings from these Attacks

We analyzed in our sandbox environment how PCs that visit the attack sites are exploited, and confirmed that similar vulnerabilities are exploited in all of these attacks. It attempts to target known vulnerabilities in software, particularly in third-party application such as Oracle Java, Adobe Acrobat/Reader and Flash Player installed on visitors’ PCs.

Yet, there is no hard evidence of how these attacks make the initial intrusion into the websites they infect, and speculation has surfaced that the web servers are compromised by 3 common methods.

Efforts to Mitigate the Risk

To mitigate the risk of being hacked, JPCERT/CC is working to raise awareness of the public to its fullest extent. We have issued not only the initial alert in June but also a joint announcement for public awareness raising in September this year, in cooperation with the Information-technology Promotion Agency (IPA) . We have also been delivering presentations on this issue and providing advices directly to ISPs, web hosting companies as well as individual system administrators. Furthermore, in order to expand our outreach to the public, we have utilized the media to draw people’s attention on cyber threats including website hacking. The topic has been covered in some TV news and national newspapers.